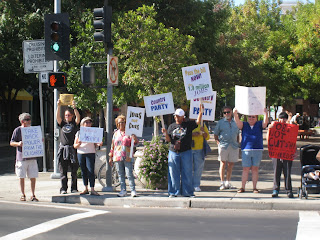 On  October 11, 2011 it happened -- Downtown Modesto was "occupied". The latest show in the "Occupy Wall Street" revue played in Downtown Modesto on Tuesday. Protestors occupied  a curb on J Street in Downtown Modesto to send a message to the perpetrators of Financial Scams on Wall Street. This show has been playing out across the nation with angry protesters waving signs proclaiming that they "have had enough" which caused an uptick in paper product stocks with the increase in purchases of sign making materials..  Wall Street moguls immediately created a paper stock derivative divided it into tranches and backed it with foreclosed mortgages which were sold off to banks and  institutional investors to fund government worker retirement funds. Profits from this newly created financial instrument is expected to help increase year end bonuses to investment bankers.

Goldman Sacks is negotiating for underwriting  the planned IPO of the "Occupy Wall Street" movement show  which was started with angel investors. KKR - Kohlberg, Kravis, Roberts plans an LBO (Leveraged Buy Out) once the IPO is complete.

The Occupy Downtown Modesto protest went off peacefully with no arrests -- actually there were no Modesto Police at the scene of the protest occupation but one cop was seen having a cup of coffee at The Serrano Social Club on J Street.

And there you have it,  Downtown Modesto playing it's part in the latest national trend of "Occupy Wall Street". 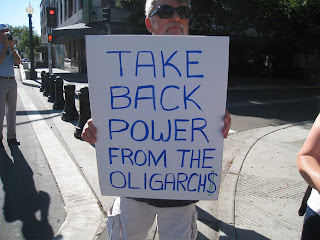 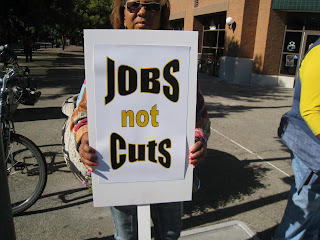 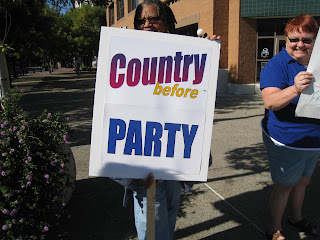 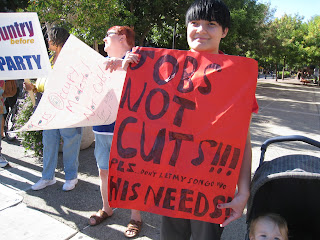 Posted by Downtown Modesto at 8:53 AM